Peppers are for every taste and garden 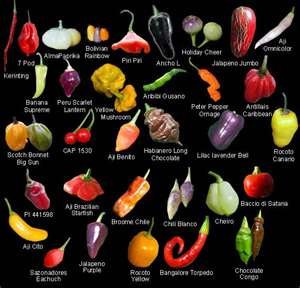 No matter your taste buds, your style of cooking or the type of food you love, there is a pepper for you!  Besides that, peppers are pest free, come in beautiful colors, are easy to grow, and look great on the patio.
There are hot peppers, there are sweet peppers, there are smokey peppers.  There are peppers of a multitude of colors-white, yellow, orange, red, purple, brown, black, green.  They come in all shapes from the size of a blueberry to 12”, straight, crooked, puckered.

Peppers originated in South America.  Their use goes back to at least 7500 BCE and were domesticated at least 8000 years ago.

One thing to keep in mind, peppers are natural plants and their heat can vary widely based on growing conditions and their pepper neighbor in the garden.  If you place a hot pepper and a sweet pepper next to each other, the sweet pepper can become a spicy pepper through cross pollination.

Once you get in the range of cayenne peppers, you should use gloves when handling.  Washing your hands with water after handling the pepper does not wash away the heat!  Transferring some of the pepper’s heat to the eyes can be extremely painful!  The best way to cool the heat is to use whole milk.

The center of a pepper’s heat is in its seeds and ribs.  If you want a milder dish, clean the seeds and ribs from the pepper before using.

We typically grow our hot peppers in pots as they seem to do best in a container.  I try to grow enough peppers to last us all winter for salads, chili, salsa, and pepper seasonings.  The hot peppers like Jalapeños and Cayenne are prolific in pots.  One plant of the hot, smaller varieties is all we need.  We have found that the smaller sweet pepper plants like banana peppers and Nikita did equally well in pots.  The large sweet peppers like California bell and Pimento seemed to do better in the garden bed.

For planting in the pots, we just use a good organic potting soil purchased from our local garden center and place one plant per pot along with a petunia or nasturtium for additional color.  To help maintain moisture, I mulch around the peppers after planted in the pot.  I water them once/week in the summer.  Converting your favorite pot to a self watering container really helps in cutting down how often watering is required.  Decorative container gardening for edibles

If you want to give your pepper plants an extra boost, they favor phosphorous (bulb food or bone meal works well), sulfur (a book of matches in the hole does the trick), calcium to prevent blossom end rot (a half dozen crushed egg shells works well), and magnesium (which is contained in epson salts, a diluted spray when the flowers appear).  Some say if the leaves pucker, this is a sign that phosphorous is needed.  Tomato fertilizer is also good for peppers as both are fruiting plants.

You should put out pepper plants after it is nice and warm.  Peppers are in the nightshade family with tomatoes and eggplant.  They should be planted outside when night time temps are above 55 and daytime temps in the 70’s consistently.  If you buy pepper plants with peppers already on them, remove them before planting so the plant can focus its energy on developing a strong root system.

If you are going to grow your peppers from seeds, start them indoors 6-8 weeks before you will transplant outside.  You can get unusual varieties not at your local nursery in seed catalogues.  Baker Creek Heirloom Seed company has some very unique varieties from around the world.  Although the spectrum available today in stores is quite nice.  You can also order plants as well from most seed catalogues.

Surprisingly, peppers don’t like extremely hot weather.  They get sunburned when the temps get into the 90’s consistently.  Their sunburn looks like dark spots on the exposed fruits.  If you can, move them into the shade when temps are extreme.  They won’t croak, but they are stressed during periods of high heat.

Almost all veggies love fertile soil and consistent watering.  Peppers are no exception.  Some swear that stressing the plant will increase the heat of the pepper.  Now, a recent Guinness winner thinks the secret to getting the world’s hottest pepper was run off from a worm farm.  Summer garden tips

Peppers will get flowers on them that, if pollinated, will grow into a pepper.  If you look into the center of a flower, you can see the emerging baby pepper.
Anything that produces a seed or fruit needs a visit from a friendly pollinator, like the honey bee, mason bee, bumble bee, predatory wasps, hover flies, butterflies, moths, beetles, and many other insects.  It is important to not use insecticides as they kill the pollinators along with the bad bugs or to use very sparingly and not on the flowers themselves.

I plant the peppers in a pot with nasturtium or petunias to attract the pollinators and to look good on the patio.
This year I am growing several peppers:
*Purple sweet peppers for the salsa and snacking

*Cayenne for salsa and making hot sauce
*Jalapeno for salsa.  You can also smoke them to make chipotle seasoning
*Pimento peppers to add dice and add to salads
*Poblano to dry for chili powder
*Two I have grown in the past is Pasilla bajio for mole sauces (also called chile negro because of its black color) and Pablano for chili powder (the dried pepper is called ancho).  I have enough of both preserved for another year.

Pimento at top, jalapeño on bottom      Red and green cayennes

I have a Chipetin pepper I overwinter in the garage that is already producing small, very hot peppers.  Some are ready to eat size!  Peppers are a tropical perennial so can be overwintered in the garage or house to get a jump start on the next season.  Plus, if you have a pepper plant that was just outstanding the previous year, you know you will get a repeat show.

Peppers all start out green.  It is as they ripen that they turn colors.  Jalapeño will turn red if left to ripen on the vine.  The sweet peppers I am growing from seed this year will turn chocolate, red or orange.  They can be eaten either when green or after they have turned.  Their flavor, and heat, will intensify as they ripen.

The trick to keeping the pepper crop going is to harvest often.  It’s like the plant knows when it has its quota of peppers.  The blossoms will fall off until more are picked.  Save the seeds from your best pepper.  Seed saving-fun, easy and a cost saver

Peppers have many great nutritional benefits.  They contain high amounts of vitamins C, A (carotene), K, potassium, manganese, B6 as well as a good source of fiber.  Its antioxidants help the body combat free radicals.  For more details, SELF magazine has a nice compilation of nutritional information of fruits and vegetables:  pepper nutritional info

The hotter the pepper, the more capsaicin it contains.  A tablespoon of ground chili pepper would contain between 0.8 to 480 mg of capsaicin.  In Ayurvedic medicine, capsaicin is used for digestive and circulatory health support.

Peppers come in so many different flavors and heat intensity.  There is a pepper out there for everyone.  Combined with their carefree horticulture, they make a great plant to add to your garden this year.
Posted by Melodie Metje at 9:58 AM