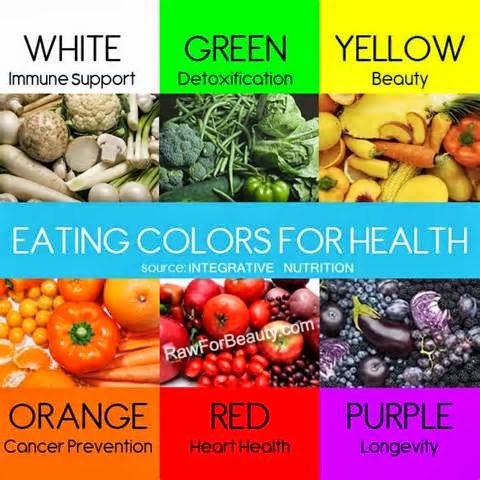 Contemplating what to have for your New Year’s resolution?  How about adopting a new way of eating that will slow signs of aging, help prevent cancer, diabetes, heart disease, Alzheimer’s, chronic fatigue syndrome, MS, you name it.

This is what Dr. Weston Price found when he went around the world in the 1940's looking at the diets of the last indigenous people on earth and they had no tooth decay and no degenerative diseases (like cancer).  If you want to learn more, there is a web page   http://www.westonaprice.org

All studies show eating a low carb diet with lots of leafy greens and multi colored veggies is the best diet in the world for slowing signs of aging, avoiding cancer, diabetes, heart disease, Alzheimer’s, chronic fatigue syndrome, MS, you name it.  Get rid of processed foods and anything with sugar added.

Eat food grown the way God intended, without chemicals, with great soil (to get your vitamins and minerals), and absolutely no GMO’s.  To know for sure this is how it is grown, grow it yourself or buy from a farmer you have visited and trust.  Join a CSA (to find one near you, visit http://www.localharvest.org ).  Organic at the store is the next best thing.

You can grow in small spaces and pots.  You don’t need much room.  It doesn’t take more time than grocery shopping or eating out.  Seeds are cheap (you can even get them for free from friends, neighbors or the veggies you get from the store).  A 6’ by 6’ plot, planted right, will grow most of what you need for produce for most of the year.  This small of an area will grow $500 worth of produce if only doing a traditional 2 season garden.  Stretch it to a 4 season garden and the benefit goes up.

As soon as you pick a vegetable, it begins to die.  Some vegetables lose 90% of their nutritional value in a week.  The most nutritious will be that which is just picked, grown in soil that is rich in organic matter and minerals.

Truly, God created the heavens, the earth and all living plants and creatures perfectly.  He created the plants and animals to sustain us and give us everything we need.  We should remember that and eat food that is as close to its natural, fresh state as possible to feed our bodies the perfect nutrition.

Eat well, live well.
Posted by Melodie Metje at 3:30 AM No comments: 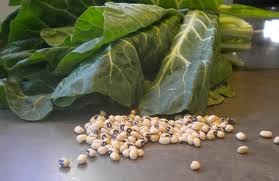 History of black-eyed peas
Black-eyed peas were first domesticated in West Africa and widely grown in Asia.  The "good luck" traditions of eating black-eyed peas for the New Year go as far back as Babylonian times (2500 years ago).  The tradition then was to have bottle gourd, leeks, black-eyed peas, beets, spinach, and dates as they were all symbols of good luck.

This Jewish tradition was brought to the southern US in the 1700’s.  Today, the good luck Southern meal includes peas for prosperity, mustard greens for money, and pork for moving forward.  Cornbread is also part of the meal, but just for its sweet goodness.

George Washington Carver encouraged the planting of black-eyed peas because they fertilized the soil, are nutritious and very affordable.  Black-eyes peas are chock full of nutrition.  They contain protein, calcium, vitamin A, and lots of fiber.

Recipe for your good luck peas
To cook black-eyed peas, I add some ham and diced onion and simmer in chicken broth.  You can add vinegar or some hot peppers for a different taste.

Growing your own peas
Black-eyed peas are a warm season crop that is not susceptible to pests or disease.  They are not actually a pea at all, but a bean.  The peas should be planted after all danger of frost has passed and the soil is warm.  They are very drought tolerant so little watering is needed.  I start mine indoors in April and set out around Memorial Day.

If using just for fertilizing, legumes should be cut before they start producing pods as the seeds use up a lot of the nitrogen fixed in the roots.

A side benefit of growing black-eyed peas is that the flowers produce copious amounts of nectar for pollinators, like bees.  Be sure to not use any pesticides on your black-eyed peas as they will kill the bees, too.

For fresh peas, you harvest the beans when the pods are 2-3” long and the peas have begun to swell.  After harvesting, simply shell the peas into a freezer bag (don’t forget to label with type and date).

For dried beans, wait until the pods have dried completely on the plant.  Pick the pods and shell.  You can easily store in a quart jar until needed.
Posted by Melodie Metje at 3:30 AM No comments: 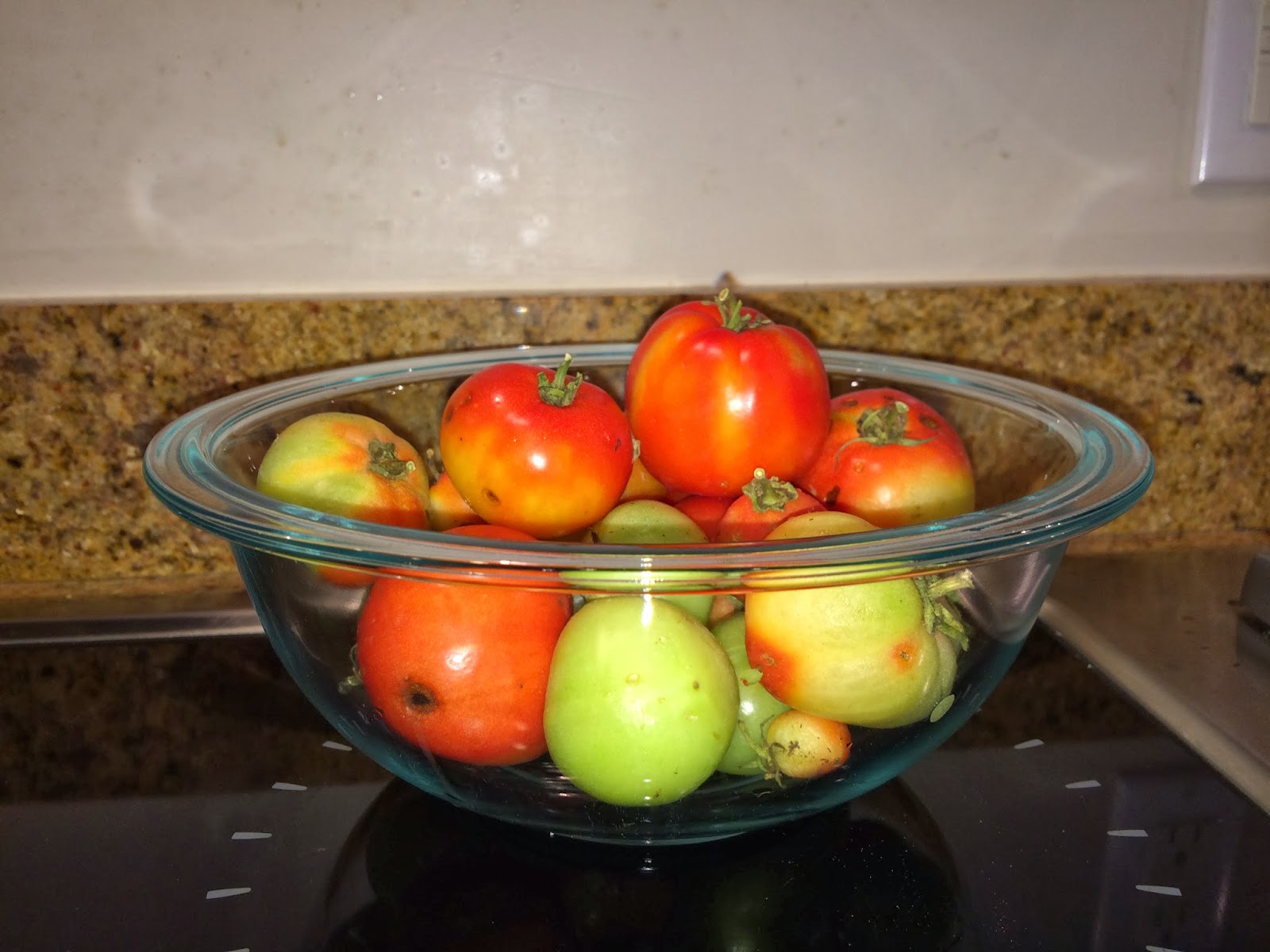 Before the first freeze of the season, I pick all the green tomatoes and store in a dark place.  This year, I placed them in a bowl and put the bowl in the pantry.

The tomatoes are ripening slowly.  We are still able to use home grown tomatoes in salads.  Looks like we will have them until after New Year’s.

The tomatoes are not as flavorful as if they had ripened on the vine, but still have a good, fresh flavor.
Posted by Melodie Metje at 3:30 AM No comments: 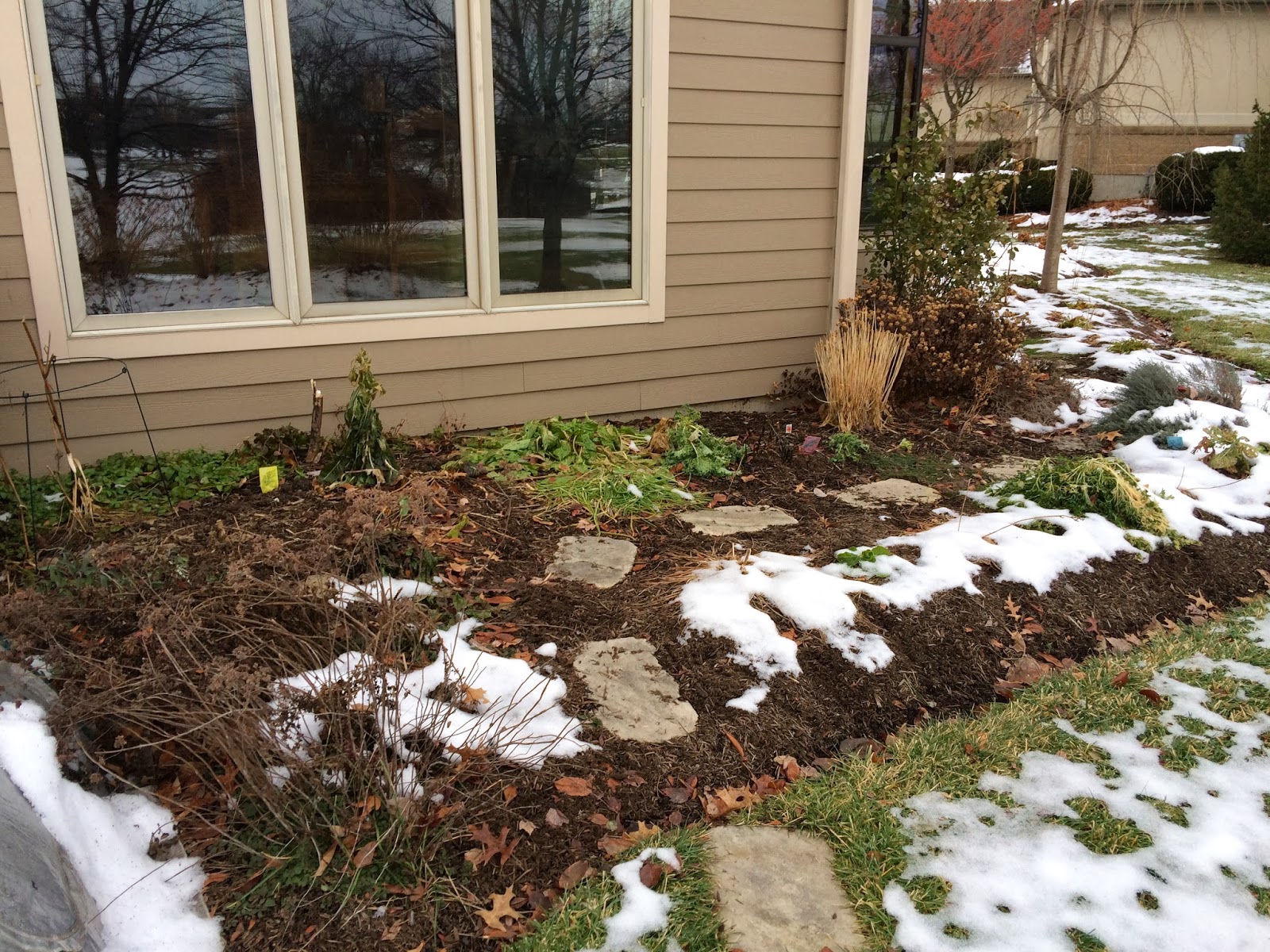 
Most think that nothing is alive to eat in a mid December garden.  Winter is hard on almost all living green things, but some can out weather even the harshest winter temperatures.

So, what is still surviving in mid December?  Oregano, creeping thyme, thyme, mint, parsley, celery, kale, cabbage, sorrel, chives, and onions are all still green without any cover.

Posted by Melodie Metje at 3:30 AM No comments: