Cucumber info and tips for growing 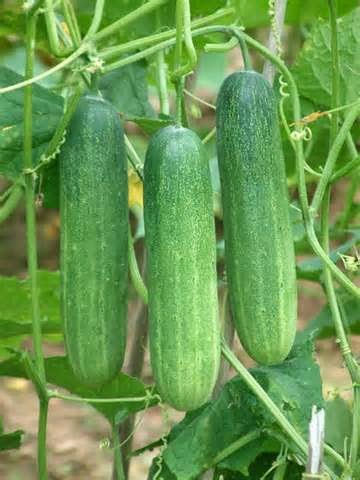 Cucumbers are a tropical plant and love heat.  They should be started indoors 4 weeks prior to the last frost (mid March in our Zone 6) and transplanted outside after all danger of frost has passed.

Cucumbers have been around for thousands of years and originally were cultivated in India.  The cucumber arrived in Europe at least 2000 years ago.  The Romans loved them.  They were so well thought of that Christopher Columbus brought the cucumber with him to Haiti in the 1400‘s and was likely aboard the first ships in Virginia in the 1600’s.

Cucumbers are a good source of potassium, antioxidants like beta carotene, lutein, vitamin C, vitamin A, vitamin K.  It also has a diuretic properties.

Cucumbers should be planted in full sun, rich soil, and given consistent moisture.  Cucumbers can be grown in pots, on the ground or on a trellis.  If growing in soil, plant 4 seeds in hills 3-4‘ apart and thin to the strongest two.  I plant one to a pot or trellis.   They seem to do equally well in a pot or in the ground.

The trick with cucumbers is to harvest often.  Pick the fruits after the “fuzz” has smoothed out and before they turn yellow.  The sooner you pick the cucumber, the less and smaller seeds it will have.  Frequent harvesting encourages the vine to grow more fruits.  The vine can only support so many fruits at a time.  It will wait until you harvest one before allowing a flower to go to fruit.

If growing in pots, look for patio, dwarf, bush, or compact in the description.  Some small varieties include Lemon, Suyo, Salad Bush, Fanfare, Sweet Success.  One vine was all we needed to have enough cucumbers to make pickles for the year for my husband and for salads for me.

Fertilize weekly and keep evenly moist.  Do not let soil completely dry out.  This will result in bitter or hollow fruits.  Each plant produces both male and female flowers.  The first flowers will likely be males.  Don’t be surprised or worried when the first flowers fall off without fruiting.  When the female flowers appear, you will get baby fruits.
Posted by Melodie Metje at 3:30 AM